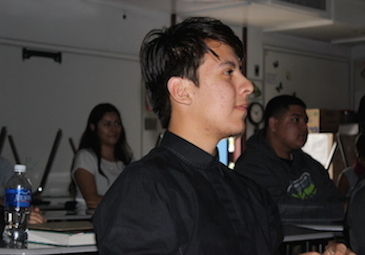 Sophomore Eduardo Ruiz, 16, is competing for a second year on the Academic Decathlon team. 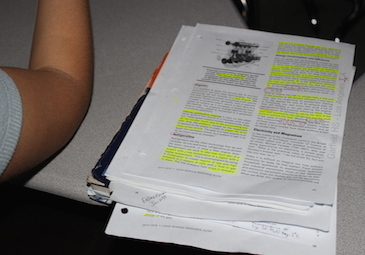 Decathletes  master at least one thousand pages of curriculum in preparation for each tournament. 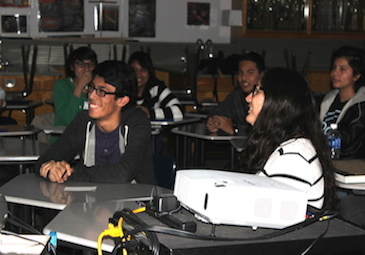 Brain teasers and games like Jeopardy  are utilized tobreak up the long hours of daily practices. 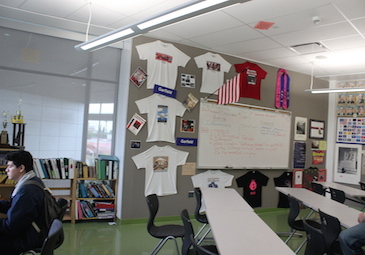 Past tournament themes are commemorated with t-shirts on Mr. Murchie's classroom wall. 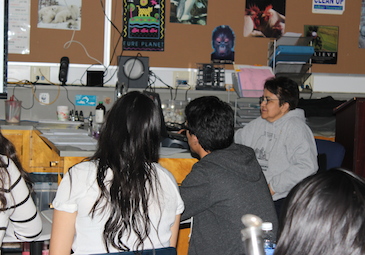 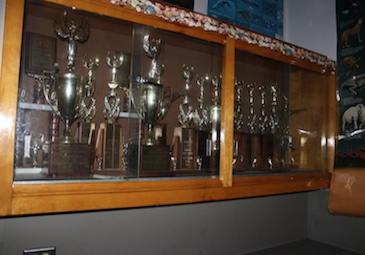 Trophies in Romero's classroom  honor the original Academic Decathlon team from the mid-1980s. 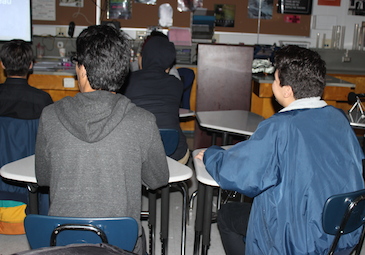 The members of the Academic Decathlon  say they have found a new family within the team. Before each practice starts, team members grab a snack and catch up before they buckle down to study. 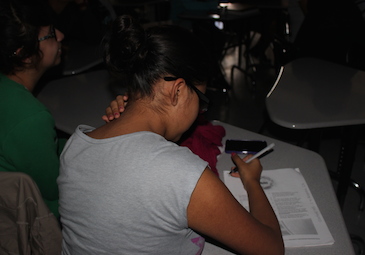 With six weekly practices,  students must leverage their time between school and the team. 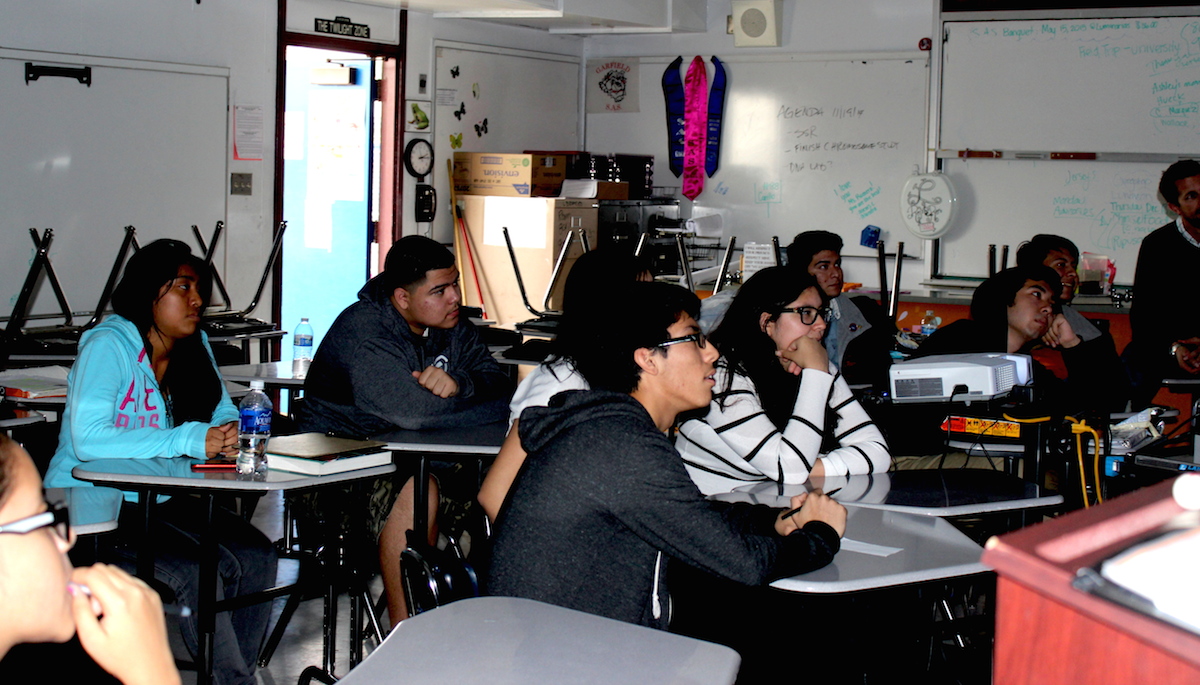 The students of Garfield High School, equally as exuberant as they are focused during practices, are currently gearing up for a scrimmage against neighboring rival Bell High School on Dec. 22 and a city tournament at the end of January. Co-coached by Garfield High School teachers Kevin Murchie and Lucille Romero, the team meets six days a week for upwards of five hours each day to master the nearly one thousand pages of curriculum fair to appear at any given time during the three-part tournaments.

Garfield’s Academic Decathlon team is split into an A and B group, determined by a test taken during the summer before the school year stars, and is comparable to the separation of varsity and junior varsity sports teams. Within those teams exists three Honors, Scholastics and Varsity students based on grade point average— Honors maintain a 3.75-4.00 GPA, Scholastic 3.00-3.74 GPA and Varsity below a 3.0. During a tournament, each team member competes against other students in his or her division with a speech, interview and essay portion followed by objective multiple choice tests in subjects like art, literature, economics science and math, concluded by the Super Quiz round where teams of three go up against competing schools to answer questions in a rapid-fire seven second fight to the medal podium.

And Garfield High School is a heavy weight competitor when it comes to taking on other Los Angeles Unified School District teams as well as state-wide opponents. Last year Garfield took on more than 2,500 schools to rank sixth in the city, 19th in the state and 30th in the country.

Both team members and Murchie agree their success comes down to one main factor: time.

“That’s the secret. You’ll only be as successful as the time you put in,” Murchie, whose been teaching English at Garfield for 11 years and coaching the Academic Decathlon team for nine, said. “We practice the same hours as the football team and I think people probably understand sports analogies more. The more you practice a sport, the better you’re going to be. It’s the same with this.”

This year, time has been of the essence for the team as the theme established by the United States Academic Decathlon for the season, New Alternatives in Energy: Ingenuity and Innovation, has proven particularly difficult. In past years teams have become experts in assigned subjects like World War I and Russia, but such an abstract theme as this one has only motivated members to put excelling during practice on the forefront of their priorities.

“It takes a certain amount of discipline to go home and say, ‘I’m going to tackle thermodynamics tonight,’” 16-year-old and fifth ranked Varsity competitor within LAUSD, Joey Navaro said. “But that’s what really motivates me. It’s because you know that you can do it and become top 10 in the country.”

The team hasn’t gone without its hardships, though. Garfield High’s culture sometimes places excelling in the classroom on the back burner for sports trophies and championship titles on the football field, but this has only pushed the decathletes to create a name for themselves beyond what the local community sees them as.

“This is a group of people that is going above and beyond doing their homework every night, going above and beyond just showing up to class. They’re putting it on the line on weekends against other schools. They wear their jackets with pride,” Murchie said. “People see East L.A. sometimes and they’re scared because they think that they are gang members. I think they can show them that East L.A. is something different.”

Breaking down the stereotypes of what often comes with a school made up of more than 98 percent Latinos and a student body of which only about 30 percent in Math and 43 percent in English scored above “proficient” on California Standards Tests in 2013, also inspires team members to defy the odds.

“What motivates me is every night going home and realizing where I come from and wanting to get out of there,” Varsity member Eduardo Ruiz, 16, shared. Ruiz rides the bus from South L.A.’s Skid Row everyday to get to school. “Whenever I feel like I can’t do this anymore, I just think back to what my parents did for me and it doesn’t even compare.”

Seventeen-year-old senior Anani Galindo, who’s waiting on letters of admission from MIT and University of Chicago, says she has sacrificed relationships with her family and time at church to be on the team.

“Sometimes I don’t even get to see my dad when I get home because he’s asleep,” Galindo, who often attends 5 a.m. church services before school, said. “They’re very supportive but sometimes they worry about me because there are times when I have so much work to do. It’s really tough for them, too.”

For the teammates though, Murchie and his students agree that the Academic Decathlon team has become a home away from home during their high school years.

“I think it becomes a safe haven for people who have been made fun of or have not always been comfortable with how smart they are,” Murchie said. “Now all of a sudden, you’re with these other people and they understand you. They sacrifice a lot, but I think the people they are here with have become a surrogate family.”

“This was probably the best decision I’ve ever made in my life because it introduces you to a whole other world,” Rios shared. “I felt like to be somebody in high school I had to be the star of the team; I had to be a jock. But Decathlon just puts you in an environment with such great people, such good coaches and such good friends.” 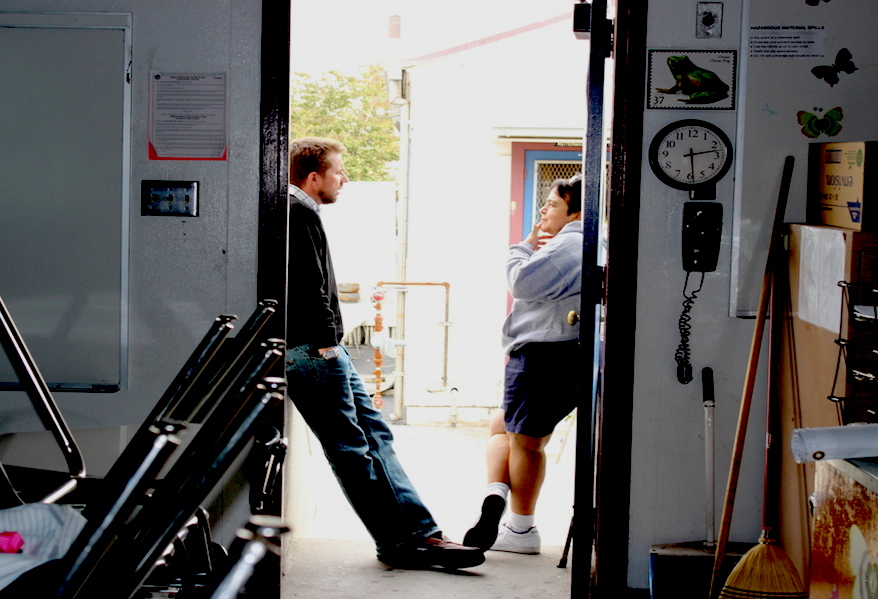