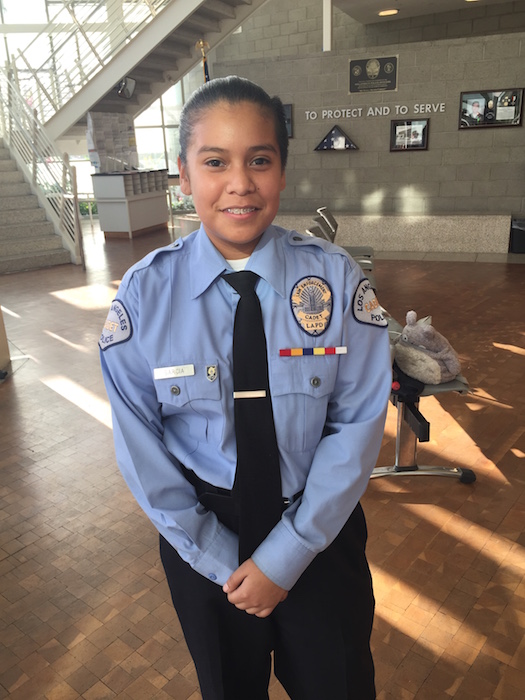 "This program has made me a more responsible person, and has helped me to understand different points of view. It gives me opportunity to does things no one else gets to do." 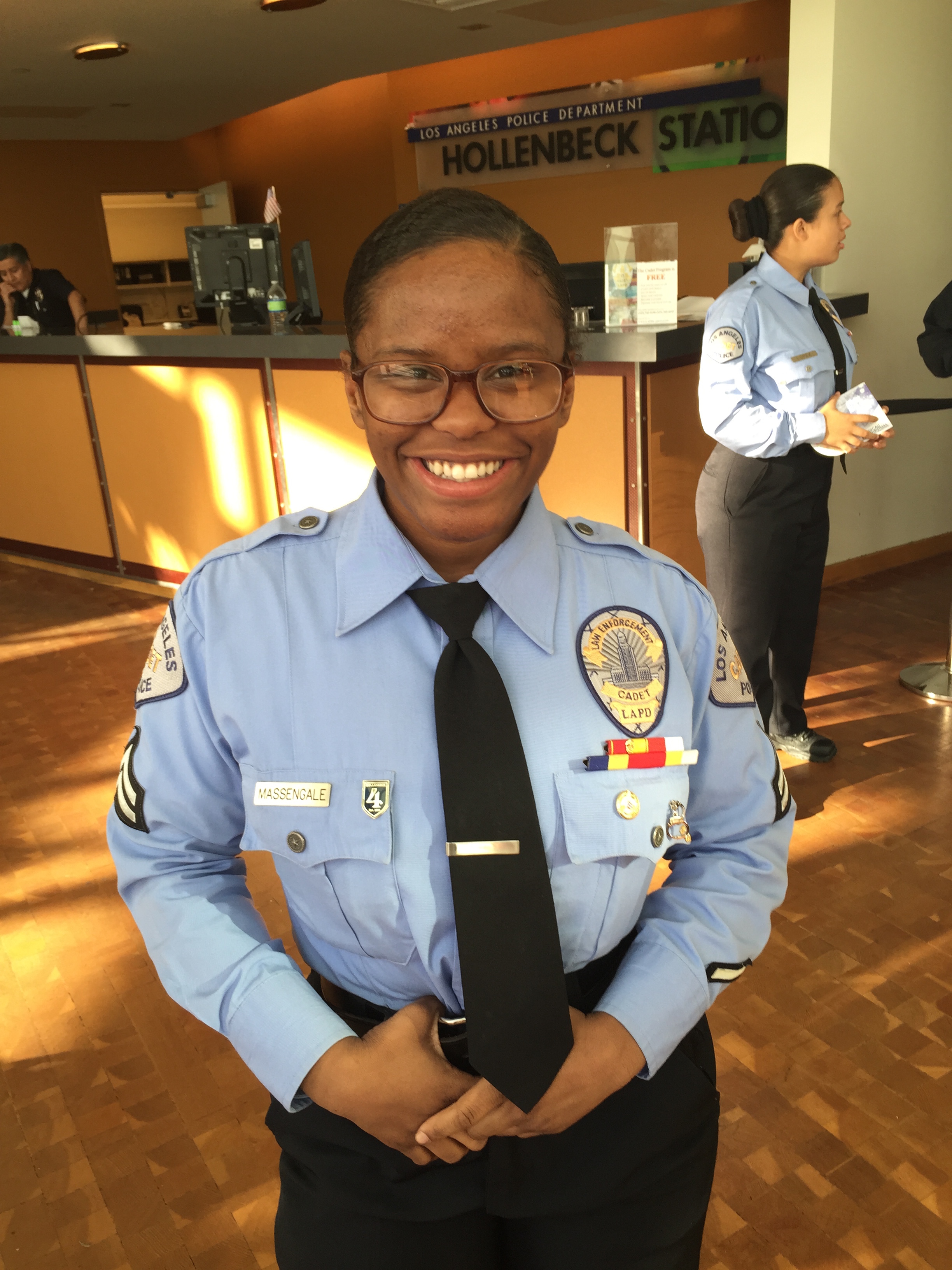 "This program helps me experience my future. Since I want to be a Marine, I was able to be a Devil Pup and experience the Marines in person. It gives me a leg up on what I want to be doing." 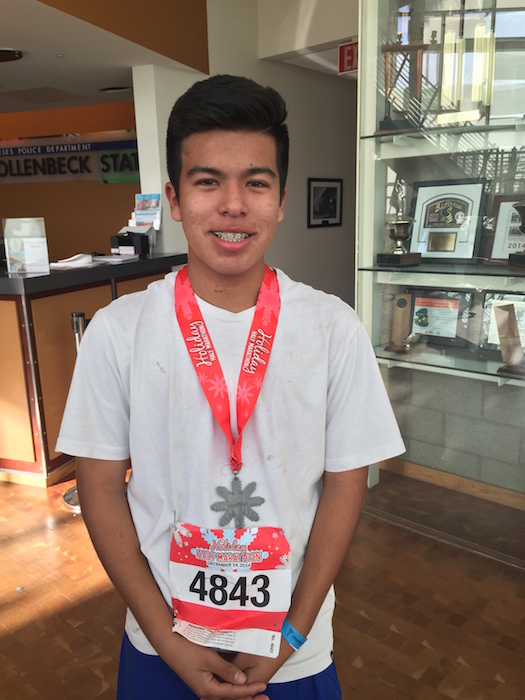 "This program means so much to me. I get to learn to work with officers. My GPA is also way higher now. Without this program, I wouldn't be where I'm at now."

LA Teens Get a Chance to Prove Themselves

The cadet program at divisions all over Los Angeles uses mental and physical training to keep teens out of trouble and teaches them hard work and respect.

Massendale, is only sixteen, yet has her future completely planned out. She plans on joining the Marines, after attending either the University of Southern California, or the University of California at Berkeley. She has high hopes for herself, and this is because she has a whole police squadron supporting and encouraging her. Massendale is a member of the Hollenbeck Police Force Cadet Program, and an outstanding one at that..

The program is one that all divisions of the Los Angeles Police Department have. The process to be accepted is not an easy one, and it doesn’t get any easier once the students have been accepted.

The program is for students ages thirteen to twenty, and has strict guidelines for acceptance. Officer Nathan Ruvalcaba, who oversees the Hollenbeck division of the cadet program, says they look for dedicated students who are ready and willing to learn, and to put the time and effort into the program that it needs.

“I tell these kids, you will get out of the program what you get into it,” says Officer Ruvalcaba."

The students must meet a set of requirements; including a physical to make sure they’re in shape, a minimum GPA and a letter of recommendation from a teacher or close friend.

After receiving all the applications, Officer Ruvalcaba sits down with the parents, to get a feel of what kind of environment each potential cadet comes from. He says this is the most important part of the process, and he does this to find out “why the student wants to enter this program.”

After being accepted, the students are not yet cadets. They must first pass an 18-week, rigorous academy. This is to prepare the students for what lies ahead, and to get them in mental and physical shape for the rest of the program.

Officer Ruvalcaba wants to make the academy program as meaningful as he possibly can for these kids. He wants them to get the most out of the program, which is why he believes it was positive when the program changed from building police officers to building good people.

“In the past, it used to be called the Explore Program, and we were really making officers. But we saw that only about 3% of these cadets, or explorers were getting hired as officers. So instead of teaching them police work, now we’re teaching them life skills, and being a good citizen.”

Now, Ruvalcaba brings in guest speakers to peek the interests of the cadets. He mentioned that one student told him he wanted to be pre-med in college, so Ruvalcaba brought in a doctor. Another wanted to be a graphic designer, so he took the cadets to Nickelodeon as a field trip. Ruvalcaba wants these kids to understand what it takes to achieve the goals and dreams that they have for themselves.

Ruvalcaba also understands the basic needs of these students, who often come from broken homes and poor areas. Money is often a necessity, which is why Ruvalcaba arranges job fairs at the station.

“We know these kids want to earn money, whether it’s to help their families or just for themselves. We’ve been pleased to see companies come to us, because they know the cadets and want to hire the cadets, which is really great.”

Other important things to Ruvalcaba while the students are in the academy is focusing on schoolwork. They offer tutoring to any students that need it, and encouraging writing and spelling.

“I had a kid come in here with a 1.5 GPA. It was so exciting to ask for his report card at the end of the school semester, after he had been in the program, and see he had a 3.2. He was so excited.”

And this cadet program opens up so many other doors. Massendale talked about her experience at Camp Pendleton, where she was able to train with a female Marine squad for ten days. She participated in boot camp with them every day, and it was there that her desire to become a Marine flourished.

Ruvalcaba says the acceptance to this program at Pendleton is intense- the cadets have to go through a strenuous physical test just to be admitted. Once the cadets have been accepted, Ruvalcaba chooses from those based on the time they put into the program back at Hollenbeck, and sends them on their way to the Devil Pup program. Run by the Marines, the cadets are put through all the same paces as Marines twice their age and expected to keep up. There, they learn valuable lessons about life.

“After those ten days, they change. They experience, for the most part, what Marines experience; camaraderie, teamwork, and they don’t give up. I had two kids call me crying, wanting to give up. They needed that call; they needed to hear that encouragement from me. And they’re so happy they finished.”

And for the about one third that stay with the cadet program all the way to college, the officers help them with college applications. Just recently, Ruvalcaba helped one cadet receive a scholarship to Hamilton College.

“We know people that know people. The students can only do so much, and we try and help with scholarships however we can.”

The cadets milling around the lobby of Hollenbeck station were not your average 14 to 18 year olds. Yes they had uniforms and ribbons, and were not out hanging out and goofing off with their friends like most kids their age do. But more importantly, they stand up straight, they look you in the eye as they firmly shake your hand, and they know that with a little help from the police and a lot of hard work, they can achieve all they set their mind to.