Home to the last largely Filipino congregation in Boyle Heights.

This synagogue opened in 1913 and is currently being renovated.

This church operates through the mission of the Salesians of Don Bosco.

One of the flagship churches of Victory Outreach International. 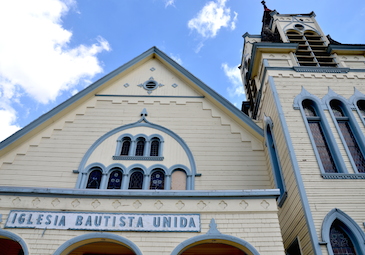 Has been a community staple for more than 60 years.

Tenrikyo is a monotheistic religion aimed at promoting 'The Joyous Life.'

Rissho Kosei-Kai Buddhism was founded in Japan in 1938.

The cemetery is well over 130-years-old and has its own chapel.

But on Sundays, most of life in Boyle Heights slows; the streets empty, businesses take the morning off, and local churches become a gathering place for hundreds of family and friends from around the area. Perhaps no place comes more alive on Sunday mornings than Iglesia Alcance Victoria este de Los Angeles, or Victory Outreach Los Angeles, where dozens of people pour in and lively music pours out of the church located on the corner of First and St. Louis.

The ministry to which Alcance Victoria belongs, Victory Outreach International, was famously founded in Boyle Heights by a former heroin addict in 1967, and has since spread to thousands of congregants across the country and the world, but its mission is still alive and well in the community where it all began.

"This city is a huge part of our history. We really don't go to the fancy cities or fancy neighborhoods. We purposely go to the ghettos, to the hoods, wherever there's hurting people," said church member Curtiss Cortez. "It's all through Christ, it's all through Jesus. A lot of us come from different backgrounds, but we all share the same thing, that we've been what we call 'set free.' The whole lifestyle of it, it's really what saved us."

Alcance de Victoria is the religious home to approximately 500 members, and more than 30 different Bible study groups, with roughly 50 people in charge of organizing the ministry. The church provides weekly Spanish-language church services on Sundays, youth ministry services on Wednesday, and monthly mega-services with other Victory Outreach congregations in the area.

During the Sunday service each week, the congregation’s children are provided with a youth service which includes a Bible-based lecture, crafts and snacks. Though the Sunday youth services are aimed at younger children, through age 11, youth minister Martin Osario said that such programming can work to provide a safe and stable refuge for kids whose lives may already be somewhat uncertain.

“Sometimes, you don’t know who you’re going to get here,” Osario said. “Some of these kids, they live a lifestyle that we don’t see. We just see them here in the church, their parents are struggling, they’re trying to find a solution for their problems. You’re going to face certain problems like that, and we as a ministry need to be open to that.”

Victory Outreach International congregations around Los Angeles County and beyond.

As is becoming the norm with many other churches in Boyle Heights, a significant portion of the Alcance Victoria congregation, including Minister Osario, hails from outside of the immediate community, with members commuting from Lynwood, La Puente, Montebello, and other nearby cities.

Yet, across geographical differences and language barriers, between friends and strangers, services are still a familial affair; members, almost without fail, all greet and part ways from each other with a “God bless you” and a handshake or hug.

In addition to serving those who walk through its doors each week, Alcance de Victoria is strongly committed to community outreach. The church operates men’s, women’s, and children’s rehabilitation homes and shelters in Boyle Heights, organizes community events such as meals on Skid Row, and hosts the annual Miracle on First Street Christmas Toy Drive, which can draw more than 1,000 people and will take place this year on Dec. 13 at the Hollenbeck Youth Center.

Church members evangelize around Los Angeles every day of the week, in particular reaching out to those in the community who have been affected by homelessness, violence and drug addiction. On a recent Sunday in December, the church marked not only its monthly mega service, but also the graduation of brothers from its men’s home, who had successfully spent at least a year working toward recovery through the church.

One of those graduates is Juan Martin Salas, an unimposing man who greets members as they arrive for Sunday services, and whose harrowing story of addiction, violence and recovery sounds like something out of a movie, and the very mission statement of Victory Outreach itself.

“When I was thirteen I started doing drugs because of my mom, she was a drug addict,” said Salas, who soon after joined a gang and was subsequently shot, by the first of eight bullets on three separate occasions, in the back. “At the age of fifteen I was shot again, in the head. I was in an eight hour coma, and surviving that day, it was a miracle of God. So God was calling me since a young age.”

Despite just narrowly surviving, and having a brother who is paralyzed as a result of gang violence, Salas returned to the streets for many years, and only recently decided to answer what he describes as a call from God. He remembers seeing Victory Outreach members at work around Los Angeles, and now, after more than a year in recovery, has taken it upon himself to pay it forward to the people who are living the same life he was for so many years.

“I still have a bullet in my back, so I know I have a calling. My calling is to go out to those gang members, those drug addicts like me in the neighborhood, where nobody wants to go,” Salas said. “That’s the life he rescued me from. He rescued me. If God did it for me, he can do it for anybody else. I know today I graduate, but I’ve decided I’m going to serve God the rest of my life.”

Now sober and an active member of the church, Salas is focused on being a father to his three daughters, and serving as living proof of the change that Victory Outreach can bring about.

“I should be dead or in prison. Dead because I’ve been shot eight times, and in prison because of the lifestyle I had,” Salas said. “It’s not about me no more. This whole 15 months of recovery was about me, but now it’s time to try to go out to those hurting people, the ones that nobody wants to reach out to, and bring them in. That’s what I want to do, that’s what God put in my heart to do.”

Denominationally, Victory Outreach identifies as Evangelical and Pentecostal, but some members find their faith most firmly rooted in their relationship with God, rather than any particular branch of Christianity.

For Salas, Sanchez, and other members who may find more traditional means of learning about God to be too polarizing, the teachings of Victory Outreach represent an approach to faith that is forgiving in many senses of the word.

“Something that we’ve been teaching youth is like, it doesn’t matter if you don’t forgive yourself, because God forgave you,” Sanchez said. “It doesn’t matter what you’ve done, and it’s more of grace, like God’s grace in our lives, and telling them that they have a purpose in life. Whatever situation they’re going through, it doesn’t matter, God’s always going to be there.”

"When we came here in 1994, we had no trouble parking alongside the road. Now you can hardly find a place to park, especially on a Sunday. And the apartments are filled. We do not know what the future will be. But I think [Boyle Heights] has a bright future."

"Faith and community is a very dynamic experience for us. This is a community that was known very well for gang activity and killings. I had the opportunity to minister at some funerals where the member of one gang was killed, and the other gang was waiting outside to still kill more members of the family, and I was in the middle of that."